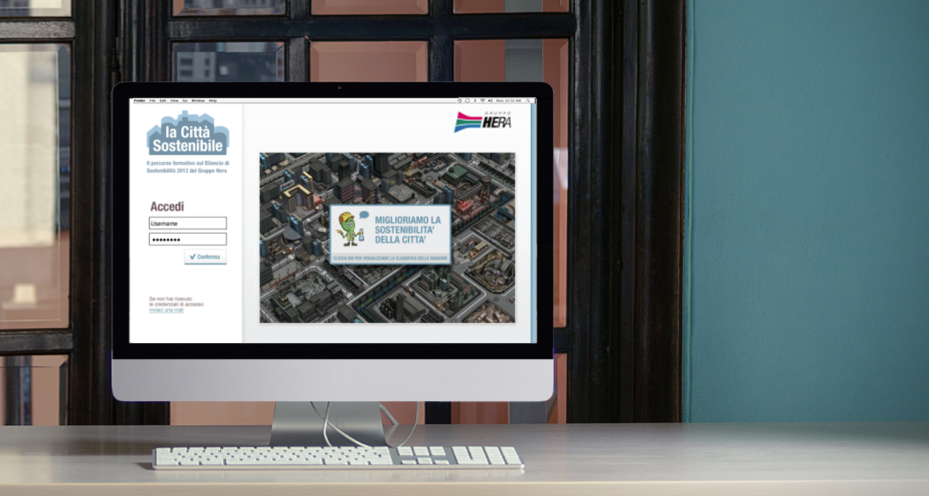 Hera (Holding Energia Risorse Ambiente; English: Energy Resource Environment Holdings) is a multiutility company based in Bologna, Italy. Hera operates in the distribution of gas, water, energy, waste disposal the provinces of Bologna, Ferrara, Forlì-Cesena, Modena, Ravenna, Rimini, Pesaro and Urbino, and in some municipalities of Florence and Ancona. In October 2012, Hera approved the merger with AcegasAps Group, which operates in the cities of Padua and Trieste. In 2013 Hera is the first Italian domestic operator for waste treated (above 5.4 million tons waste treated), the second one in the integrated Water cycle (300 million mc of water), the third player in gas distribution (2.9 billion of mc of gas distributed) and the 5th player in the Italian Electricity business in terms of electricity sold (11 TWh of electricity sold).

The main target of the game is to improve the city’s sustainability, virtually activating the same activities that Hera has reported into its 2012 Sustainability Balance Sheet. To activate a sustainability activity, a player has to choose a district in the city map and then he has to correctly complete some correlated assessments.
So game’s reason isn’t just formative, but it has also the aim of communicating the real impact – and so the importance – of all that “sustainability activities” that employees, during their daily job, could perceive as a waste of time.

Gameplay in brief
The e-learning game main interface is an animated 3D map of a city.
At the beginning, this city is very polluted, crowded, inhospitable (clearly “unsustainable”). Players’ task is to enhance the city’s sustainability; doing so, city’s map will become cleaner, happier, more colored, lively, livable.

Hera’s employees are sorted into opposing teams of 4 persons; the game will be won by the team who has better improved the city’s sustainability.
The 4 users of a team play simultaneously: the e-learning game is in fact a real-time turn-based multiplayer.

We have called this approach and the technology behind it M.E.G.S: Multiplayer E-learning Gamification System. It is an evolution of our platform LUDUM.

The city map is divided in blocks; each block symbolizes a different main sustainability topic (e.g. Clients and Supplier Relationship, Work Environment, Recycle Matters, etc.); every main topic is composed by 4 formative assessments (one per team member) that offers a different level of reward points (expressed in percentage of sustainability improvement).
The in-turn player selects the main topic, the formative assessment and then tries to solve it; if he doesn’t know or he’s not sure about the answer, he can ask, by a simplified chat, an opinion to the other in-team players, in exchange of some the sustainability improving points. If the player’s answer will be correct, an animation will show the sustainability improvement in the 3D city map.
To achieve the formative tasks, every assessment activity can be preceded or followed by multimedia in-depth analysis, freely settable by backend, that explains better the assessment topic.

During the gameplay, players can also use an emoticon chat to morally support the in-turn player.

Here a brief walkthrough of the serious game’s core functionalities: