The mobile game market has realized a significant growth during these twelve years,  incrementing its revenue from 20 to 211 billions of dollars on US market. From insidesocialgames, this infographic about a growing market.

First of all, the infographic analyzes the imposing growth: mobile phone is now used daily, according to data for almost the half for relax playing. An app for any device (tablets are not so different from mobile phones) is used at least once a day, surpassing the use of television.

From the graphic, another interesting data: almost the half of places where people uses mobile games are the own bed or on public transport; this data can be explained by another phenomenon, interesting app games: the game sessions are short, based on applications that can engage users with fast and little sessions.

The common user of mobile game is part of  a varied public: is true that the leading segment is men until 35 years, but from 35 to 65 the women are the majority. The apps reflect these detections: Farmville and Monopoly are applications used mainly by women (over 26), Texas hold’em poker is used for 75% by males.

The infographic gives some hints to evaluate this massive growth of mobile market, that are been successful for companies involved, like Ruzzle or other applications used every day by milion of persons 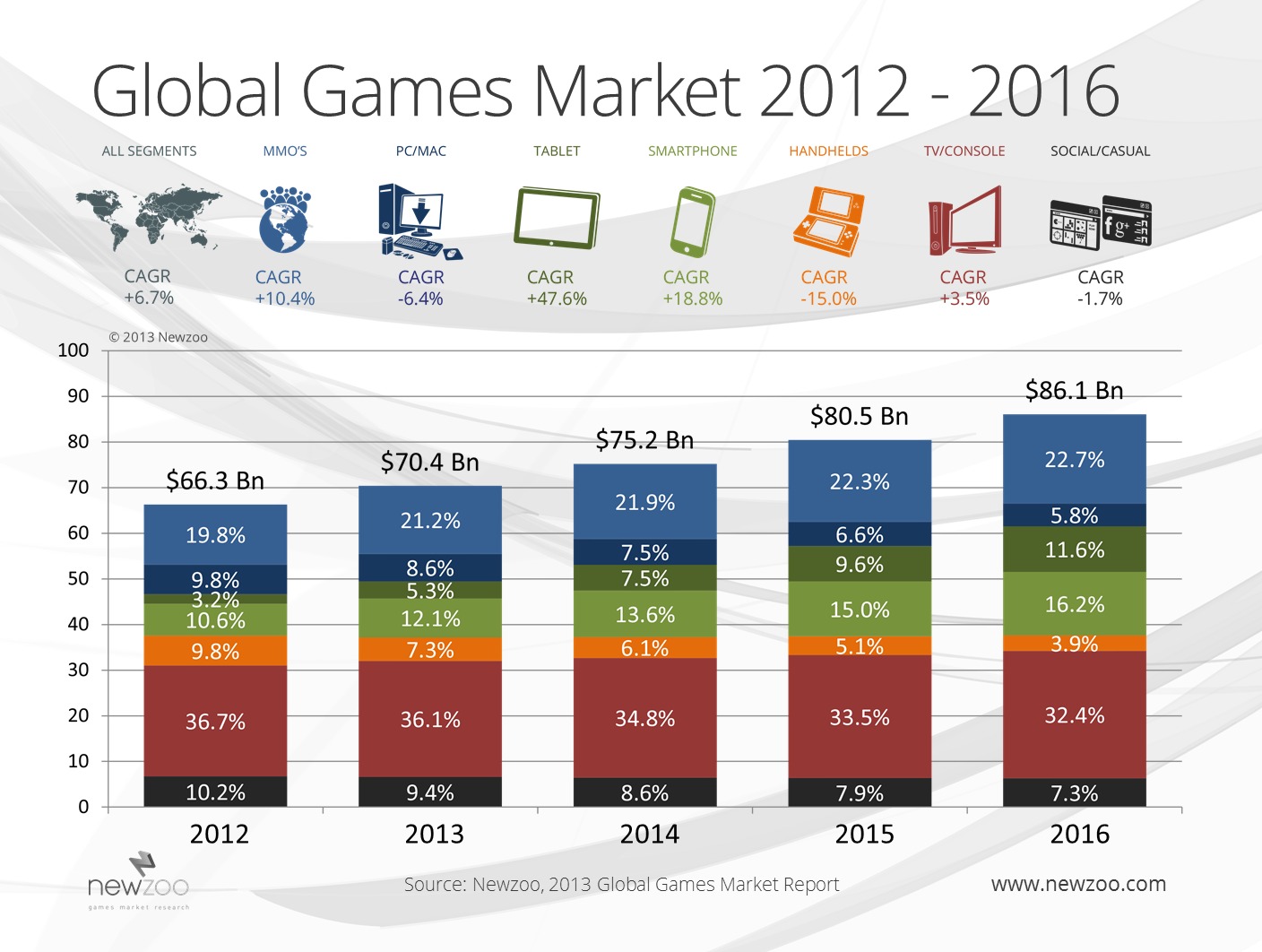 Newzoo has released a new report on his site, focusing on the big growth about the mobile games and the general expansion of the games market, estimating a compound annual growth rate (CAGR) of 6.7% per year, until 86.1 bilion of dollars in 2016.

The data posted on Newzoo describe an expected growth for the games market, revealing that the videogamers in the world will raise from 1.21 billion this year to 1.55 billion. These gamers will play on different platform according to their tastes, and the most important data is about mobile platforms, that will increase its share from 13.8% to 27.8% of the global market, with a CAGR for smartphones of 19% and 48% for tablets, generating profits for 23.9$ bilion in 2016. The highest share will remain the console games, but the CAGR will be minor than the mobile platforms. The handhelds share will suffer the worst annual growth rate, with an estimated CAGR of -15.0%.
The report offers also a detailed analysis about the condition of the market this year, focusing on the compositions of gamers (dividing them by their geographical location) and the typology of game played, from casual/social to consoles games; in these analisys, is interesting seeing compound data about casual/social and mobile games, getting the 27% of the whole market, growing from past years 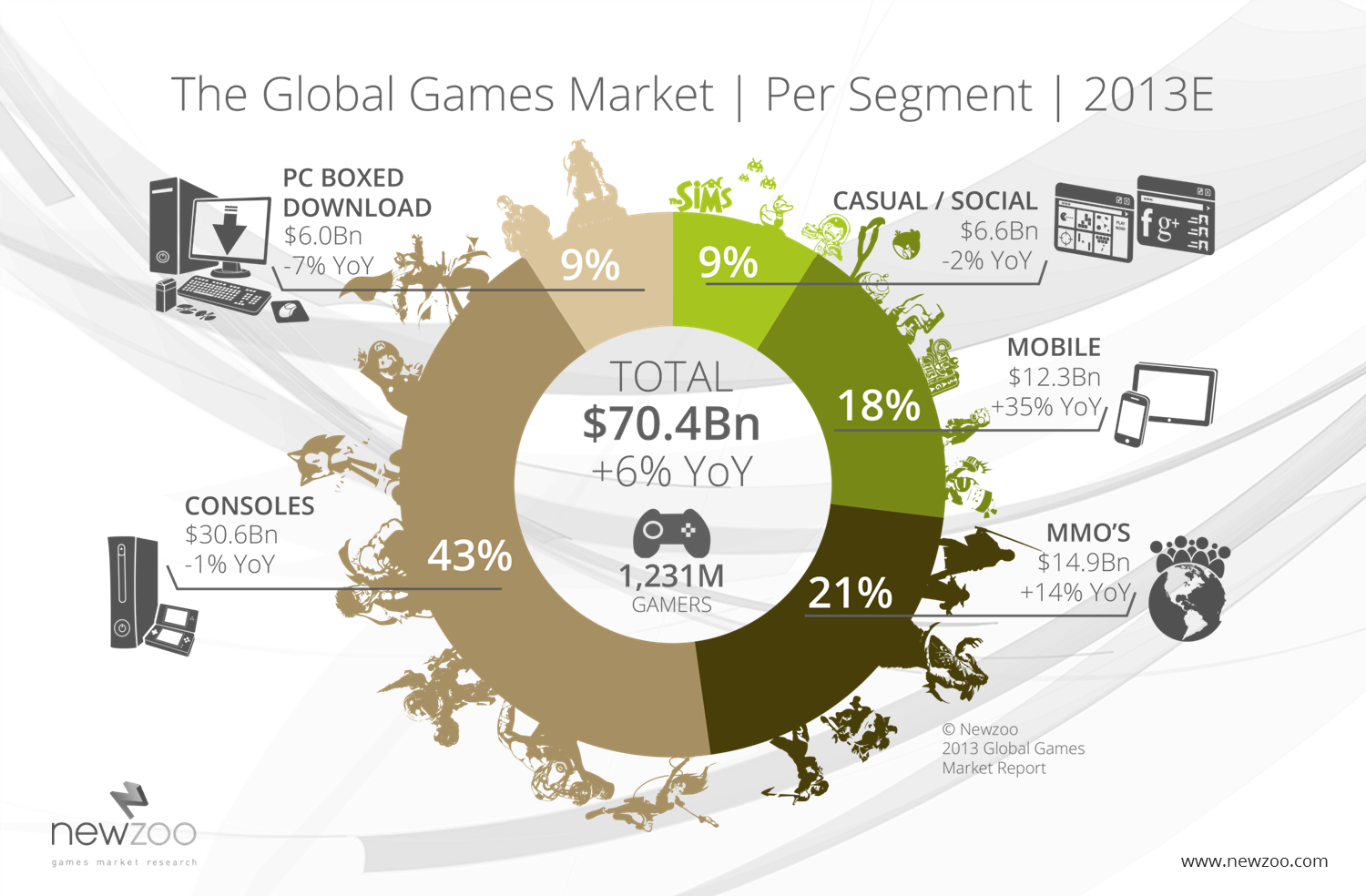 END_OF_DOCUMENT_TOKEN_TO_BE_REPLACED

The first review is live and the game scored 4 out of 5 on The App Shack.

On Saturday and Sunday part of the team will be at the stand F04 held by Indie Vault, demonstrating Act of Fury to the public.
If you’re in Milan and want to play our games please come and meet us at the stand! END_OF_DOCUMENT_TOKEN_TO_BE_REPLACED

Our Alessandro has developed Metro Milano: a useful Android App when you use public transports, if you won’t get lost in Milan!